POEM
“ It was the best of times, it was the worst of times”. the words rang true for Martin, now more than they ever did. He was a big fan of Dickens in High School, but at 32 years of age, the irony smacked him, as his father would say, upside the head. He and Mary were scheduled to close on their first house in a week. It was their dream house, an Arts and Craft nestled deep in the ‘burbs of Jersey. But today he got the call that he'd been dreading for some time now: his brother was dead.

DREAM
The lion was supposedly tamed, but Frank nonetheless was terrified. He was in a house with not only a lion roaming freely, but also large angry dogs growled nearby. A friend was telling him that he shouldn’t be afraid, that if you showed your fear, the animals would attack and rip you to pieces, but if you were calm they would ignore you. Easier said than done.

CONFLICT
Mark suddenly heard his wife outside the house, her voice was raised now.
“Frankly, you haven’t had a good word to say about anyone in this neighborhood.”
He looked out the window and saw Eve engaged with the Buntings, their neighbors from across the street. He hustled outside and up the road to where they stood surrounded by a gang of kids.
“What’s all this yelling. What’s all this yelling,” he heard himself say. He could feel the anger start to bubble up, making him a little shaky.
“I’ll tell you what all this yelling is about, your son threw a ball at the telephone wire” Pat Bunting spoke from her porch platform. She scowled with her arms crossed over her chest. “On purpose,” she added.
“Did you ask him to stop?” Mark addressed Joe Bunting, who wore a spotless white tee shirt tucked into his light blue leisure shorts.
“ We talked to the kids many times,” he said. “Now we figure it’s time to get the parents involved.”
“Sam, did you apologize?” Mark asked his son.
“Yes, yes we’ve already been through this” Eve explained. She took this opportunity to make her exit, calling over her her shoulder "C'mon Mark, don't even bother. They're just two old grumps with nothing better to do than monitor every move we make.
Mark grabbed his son's elbow and retreated to their house in silence, the squinting eyes of the Buntings like red ants crawling over the back of his neck. 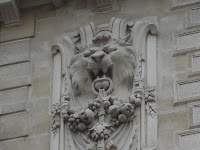 COMBO
Brian stepped out of the funeral home for a quick smoke. Across the street a gang of pre-teens played soccer, the ball going awry, nearly hanging up in the power lines that ran near their old apartment building. He remembered he and Jennifer moving in there, lugging their things up those very steps so many years ago; the bas-relief of a lion’s head above the entranceway bearing mute witness to the start of their lives together. He stepped blindly off the curb, drawn to the place that still housed so many mixed emotions, but a black SUV so suddenly appeared through a scrim of smoke, dropped there in front of him, its horn blaring; the snarling muzzle of a rottweiller craned from its half opened rear window.
Brian spun and spun. In an instant thinking only of his brother: a stiff shell, laying on display back inside Mullins Funeral Home. Only he beckoned to Brian now.
Email Post
Labels: writing writing exercises