Monstrosity: a review of The Prague Cemetery by Umberto Eco 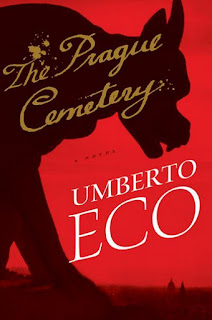 In the mid-nineteenth century, a rabble of rabbis, representing the twelve tribes of Israel, gathered in the gloom among the crowded and crumbling tombstones of a Czech graveyard relegated to the Jews and plotted the demise of the two hundred and sixty five million Christians populating the Earth at the time. So says the infamously forged document known as The Protocols of the Elders of Zion.

Who was behind this forgery? In his latest historical fiction, The Prague Cemetery, Umberto Eco posits that it was the work of one man; a Piedmontese misanthrope, a forger by trade named Simonini. Eco nests the forger's fabulous tale by way of diary entries alternately written by an aged and now mentally disturbed Simonini and his Parisian housemate Abbe Dalla Piccola, within the narration of  some intruder who has wandered into their flat and discovered said diary. It sounds more complex than it really is, though the stylistic construct is pure Eco.

Just so the reader won't be too confused, Eco includes a chapter-by-chapter matrix outlining "plot" and "story" at the back of the book. This reader somehow managed to puzzle out the plot/story without the author's aid, even though he was woefully unfamiliar with the historical facts on which the work is predicated. It is a sad commentary on the times when a writer of Eco's intellectual stratum feels it necessary to elucidate his prose structure; did Joyce of Ulysses? Nabokov of Pale Fire? Pynchon of Gravity's Rainbow? Why would one configure a novel with apparent complexity only to append an obligatory annotation?

That bit of animadversion aside, The Prague Cemetery, works as an allegory of more modern diabolism: Nazi Germany, Ethnic cleansing in Srebrenica, Rwandan genocide, The KKK, the "vast right wing conspiracy". Bigotry, racism, political division, all are fueled by stereotypes, conspiracy theories, rumor, outright lies; some pervasive enough to incite wars. Think WMD. Eco peppers the tale with just the right amount of nefarious intrigue - murder, espionage, Freemasonry, Devil worship - to interest the reader. He even includes a bit of proto-psychoanalysis, with a cameo by a character named "Froid".

In the afterword, Eco explains that most characters in his historical cautionary tale are real, excavated from the bone-yards of Europe. He tells us that even the protagonist's grandfather, Captain Simonini was veritable, having penned an important letter to the Jesuit, Abbe Augustin Barruel, a sort of conspiracy theorist of his day who had attempted to pin the overthrow of the Bourbons on the secret societies of the Jacobins and the Illuminati, in which he posits his own theory indicting the real culprits behind the ills of the world: The Hebrews. You can understand how an impressionable child at his grandfather's knee might be influenced, and later with all the right (or wrong) twists of fate, might have proliferated a lie so large it led to the Holocaust; an ugly forgery which would fall into the clutches of sociopaths; an utter monstrosity.