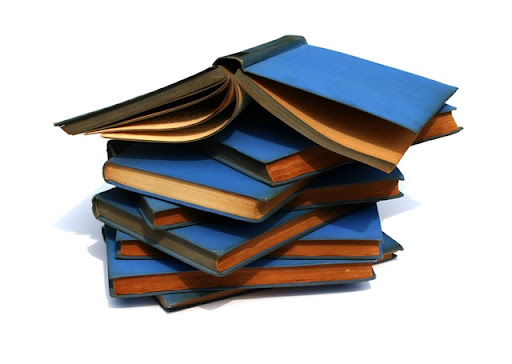 III. When One Book Is Not Enough

n this week's New York Times Book Review, Drew Gilpin Faust, President of Harvard University, is featured in the fledgling By the Book column. As a sort of boiler plate interview, the first question is always: "What book is on your nightstand now?" Faust replies with a flurry of history and mystery titles, concluding, "I always seem to be reading several books at once".

Well, she is after all a Harvard historian, and I'm guessing she's not the only one with a multi-book habit; columnist and author Joe Queenan comes to mind. I seem to remember an interview in which he describes his reading rituals of consuming up to twenty-five books at the same time. But all this brings to mind the question, how should one read? One book at a time, two, three or more? And if reading several at once, will one book bleed into the next like bright colors in a warm wash? Will one mistake Dicken's Darnay for Austen's Darcy? Will one become completely thrown off, selling their library book on Amazon and vice-versa?

I have two books going at once typically, one on the Kindle, the other on audio, so there is a clear demarcation point, so to say. It is a bit easier to keep track when one book is being read to you. It also helps if the books being consumed simultaneously are as dissimilar as possible, Harry Potter and Ulysses for example; or if the two complement each other such as Moby Dick and In The Heart of the Sea: The Tragedy of the Whaleship Essex. With the dual-media method one will also have distinct reading times: I read the Kindle during lunch at work or in the evening at home, I listen to an audiobook in the car, while exercising (rare), or when I walk my dog. Without defined reading times, it is difficult to decide how much time to allot for each book; you may get carried away by one and neglect the other.

A couple of times I've ventured into more-than-two-books territory with less than auspicious results. I find that I am most unlike Ms. Faust, who, I'm sure as a historian, must read multiple books at once in order research her own books. Maybe it's just how I'm wired-- I have only one child-- but once attempting two books of the same media, I find it difficult to give each work the attention it deserves. I only wish I could happily plow through five books simultaneously, but I'm afraid I would only finish two. Alas not everyone can read like a Harvard President.

In the spirit of Bill Maher's feature 'New Rules', one thing I can say for certain is, if I can have time to read/listen to two books at once, Drew Gilpin Faust can read "several", and Joe Queenan can tackle twenty-five then everyone who whines to me, "I just have no time to read" must read at least one book per month instead of watching Dancing With the Stars or playing Angry Birds and the like. After all there are books out there for every taste, they should be what we all devour (in lieu of popcorn and candy), whether it be just a salad, or a full seven course meal.
Email Post
Labels: essay reading