The Existential Computer: being a review of Andrew's Brain: A Novel by E.L, Doctorow 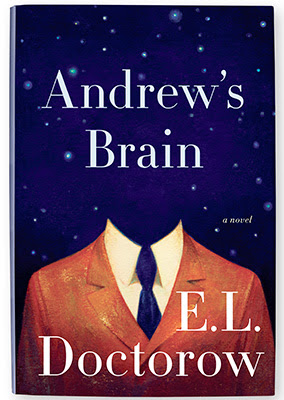 The narrator of E.L. Doctorow's novel, Andrew's Brain, is so unreliable the reader may have trouble discerning his conscious from unconscious voice, let alone truth from lies. For the author of such popular titles as Ragtime, The Book of Daniel, and World's Fair, this latest volume is quite a departure. Whereas he has typically used the backdrop of historic events like the end of the Civil War in The March -- or tangential historic figures like Dutch Schultz in Billy Bathgate -- to advance his main characters along in their pocket odysseys, in this spare psychological confessional there is no time but the present, no infamous figure but Andrew (O.K., there are a few who could be considered infamous, but, who knows, it's possible they are part of a grand delusion). He is a narrator who refers to himself in the third person, a professor of cognitive science no less; one of whom we learn has serious mental issues. Andrew, the narrator, is what you might call cerebral, in fact he's literally in his own head.


Andrew's story is kind of a sad one; his self doubt and paranoia coloring every aspect, a poor-me tone winding through his spiel like a dirge. Bad things happen and it's right away his fault. A baby dies; his second wife, Briony, whom he idealizes, is killed. A string of events which prove too difficult to accept, he attributes to himself. It is the only way to make sense of his life. His one chance to distinguish himself as a cognitive scientist is thwarted because of his own absurd behavior. As the newly appointed head (and only member) of the surreptitious White House Office of Neurological Research, he speaks of the development in Switzerland of computers which will mimic human consciousness; standalone brains, if you will. Later he asks his therapist/confessor:


"Tell me Doc, am I a computer?
What?
Am I the first computer invested with consciousness? With terrible dreams, with feelings with grief, with longing?
No Andrew, you're a human being.
Well, you would say that."

Throughout, Doctorow employs stream of consciousness, perhaps to espouse the doctrines of existentialism: that the functions of the mind: thought, intellect, memory, are not enough to give meaning to life; that individualism trumps philosophical or religious belief; that, in the words of Sartre, "existence precedes essence". One must live in the present and not allow past experience to define one. It appears that the fatal flaw of Doctorow's protagonist is to bog down in his own dark recollections and dreams, to cease living without any regard for the future. It hastens his descent through the quicksand of psychosis. But wait, can't Andrew escape? Can't he find a path out simply by eschewing the values of an imperfect society; by acting truthfully to his self (but what is the truth)? Couldn't he become the sane one, everyone else mad? Let's just say E.L. Doctorow's characters, no matter how badly they would love to escape, still inhabit the real world.