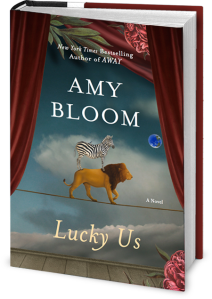 Commentary on Lucky Us by Amy Bloom

How do we define family? Is it a term describing merely our blood relations, a menagerie of characters, some of whom we have never met, never mind ever gotten to know? Or is family a group of sympathetic souls, related or not, whose lives have intertwined over the years, either by free will or luck: a group whom we can depend on, live with, and love? These are some of the questions evoked by Amy Bloom's latest novel Lucky Us, which follows a family, some related by blood, through crucially volatile times, both for the world in the twentieth century (the pre- through post-World War II years) as well as for Bloom's main characters.

Eva and Iris are half sisters, borne of the same college professor father, Edgar, through whom they are inexorably linked. They first meet in their teens-- Eva twelve, Iris sixteen-- after Iris's mother dies and Eva's own mom abandons her at their father's home in Ohio. Eva is the bookworm, Iris the drama queen-- literally; she regularly wins prizes for speech recitals. From the start, it's clear that Eva is to be Iris's little helper. She "looked at me the way a cat looks at a dog" and "talked to me the way Claudette Colbert talked to Louise Beavers in Imitation of Life..."  says Eva of her new-found semi-sibling. In time the two manage to gain each other's trust but the dynamic of their relationship changes very little.

When the duo decide to run away to Hollywood, Eva forgoes her education and learns how to cook so that Iris can gain fame as an actress. After a photographer exposes Iris's illicit affair with another actress, all the sacrifice and support in the  world couldn't save the up-and-comer from the likes of a vicious gossip columnist like Hedda Hopper. But just as the sisters are ready to hit skid row, lucky them, Daddy Edgar shows up. He's now a retired college professor with no money. However Iris's good friend and make-up artist Francisco has a plan for the crew: he's moving near his hair-styling sisters', Carnie and Bea, in New York to start a business and they've heard tell of an opening for a butler and a governess at a large estate out on Long Island; just perfect for Edgar and Iris to fill. Bloom's tale pivots and drives straight for the East Coast.
Through the use of literary devices like letters, changing voice, and alternate points of view, Bloom deepens her story of the rag-tag clan. As Eva carves out a niche for herself at Bea and Carnie's beauty shop reading Tarot cards-- telling people what they want to hear-- love continues to be the dominant impetus for Iris. In fact she's willing to sacrifice other people's lives in the pursuit of her own happiness. She informs on Gus, the German-American husband of love interest, Reenie-the-cook. Apparently poor Gus is in Iris's way, and as it turns out, there are brand new camps opening up across America just perfect for guys like Gus. But when catastrophe alters her renovated love nest, Iris hits the road once again; this time to England where she revives her acting career. It falls to Eva to mop up after her sister's mess. There she goes once more, sacrificing her happiness for the people who have become her family.

There's that word again: family. As Eva's grows larger, with the addition of Clara, Edgar's singing sweetheart, and Danny, a moppet whom Eva liberates from the local orphanage, Bloom redefines the Us in Lucky Us. Primarily through the characters of Edgar and Gus she slyly fogs the Old-World focus of nationality, religion, race, and class. The pervading subtext questions how we define ourselves; are we Black, White, Rich, Poor, German, Jewish, Homosexual, etc...? Are we rooted and predestined or can we slip the taxonomic bonds and  simply call ourselves human; having what Philip Roth called the Human Stain?

For all the inequity, unfairness, discrimination, and misfortune Bloom evinces in Lucky Us, she manages to convey a feeling of optimism throughout, of hope for not only a better life for her characters but for an improved post World War society; or for at least a return to normalcy. There is a message of forgiveness and acceptance that pervades this novel and it is contagious. It spreads from one cobbled family member to the next until eventually all the souls that are drawn together, that congregate for a definitive final portrait can truly say they care for each other.