Book Review: Out of Uganda 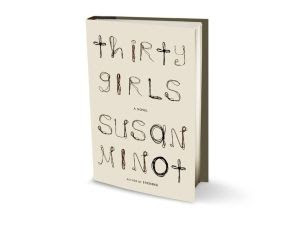 The recent kidnappings of young women in Nigeria validates the significance of Susan Minot's latest novel, Thirty Girls. It features similar atrocities that occurred in Uganda in the mid-1990's. Between 1986 and 2009, the Lord's Resistance Army led by Joseph Kony was responsible for the abduction of thousands of young girls and boys, mostly to be used as sex slaves and soldiers for the proliferation of Kony's deranged vision. Pseudo-religious credo compelled him to marry as many young women as he could then prolifically procreate so that his so-called family (read cult) could pervade and spread his deluded mission throughout the land, maximizing his purview.


Thirty Girls follows two story lines which will at length converge. The first features Esther: a Ugandan teen, one of the thirty of the title who are abducted from a convent by members of the LRA; profoundly traumatized; struggling to heal. The second studies Jane: an American journalist, just arrived in Africa to write the story of the kidnappings and of their nefarious mastermind; emotionally vulnerable after a string of toxic relationships. Can the two help each other?


With this book, Minot, whose earlier work like Evening and Folly dealt with issues of regret, unrequited love, and the pursuit of true passion, recycles these ingredients in a murky stew of trauma, despair, and loss. The dual narratives are presented in high contrast to each other. While it is easy to feel the pain of those Ugandan daughters who have been wrested from their sanctuary, who have been damaged both physically and mentally, it's a bit harder to muster much empathy, initially at least, for fortyish Jane as she thrusts herself into a series of trysts with a twenty-something local adventurer.

No sooner has Jane landed in Kenya than her friend Lana introduces her to Harry. "What do you do with yourself?" she asks him after explaining her own purpose for visiting the dark continent. "Little of this, little of that... I'm thinking of going to Sudan to look after some cows... Did anyone ever tell you you have a very old voice?...The sound of it... It's nice" There it is, that sense of a doomed love affair waiting to play out. Jane comes off a bit too breathless and clingy, like she's never seen this movie before, but who said every protagonist has to be likable.

At her best, Minot evokes the lyricism of Isak Dinesen's memoir, Out of Africa. Dinesen's themes largely reflect the divergence of African and European mores and attitudes. She contrasts black against white, but stresses how opposites must rely on each other to satisfy a universal truth. Dinesen writes:

"Two homogenous units will never be capable of forming a whole… Man and woman become one… A hook and an eye are a Unity, a fastening, but with two hooks you can do nothing. A right-hand glove with its contrast the left-hand glove makes a whole, a pair of gloves; but two right-hand gloves you throw away"

Minot, In scenes of sultry plantation evenings, shows Jane as the soul-searching American among an olio of wayfarers, each with their own baggage. With Jane's tale she manages to convey a poignant hollowness at her center that has perhaps finally adapted and begun to fill.

Young Esther, however, is the innocent victim of Man's hubris-- likely a product of post-colonialism-- in this case, the psychotic extension of hubris. Esther, like many during wartime, is psychologically brutalized. Her life and family are in disarray. She witnesses a friend shunned, banished by her family like mere dross because, in their eyes, she is no longer pure. For Esther, these experiences are not processed, they are simply waves of mutilation endured. The pinnacle of the novel, finds the author hinting of healing potential. Through revelatory dialogue there exists the right conditions for open wounds to knit. But until Jane and Esther meet, like the gloves of Isak Dinesen's memoir, they are both untethered, bobbing about in Minot's caliginous soup.

Unlike the more self-serving actions of Joseph Kony, who was most recently reported in poor health, sheltering in the Central African Republic,  the abduction of three hundred girls in Nigeria recently by Islamic terrorist group, Boko Haram, has received immediate global attention. The US, UK, and France among other nations have already offered aid-- including military and law enforcement specializing in "intelligence"-- in recovering the missing girls to the Nigerian government. Maybe the world is finally moving in the right direction when it comes to fighting terrorism, but Thirty Girls shines a light on a time when it still needed some help.