Book Review: The Largesse of the Sea Maiden by Denis Johnson 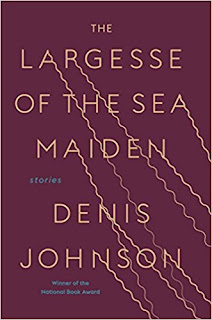 Once a younger man fresh out of High School, working full time pulling data cable in New York City, I'd had a revelation. People were not as unique as I had once thought, rather they seemed to me now to run in subsets, were categorical, could be classified. There were a few individuals I had met in my teens that reminded me of characters I was then encountering in Macy's Herald Square, where I mostly was working at the time, and elsewhere. This phenomenon continued as I moved on to vocational school (electronics) then to subsequent jobs, and indeed still visits me today. Haven't you ever met someone who not only reminded you of someone else but further fell under the heading of, what I would term, Doppelgänger? A German word, very apt. From these personal experiences I concluded there may be sets of two or three or more people you've crossed paths with in your life, persons related to each other excluded, who have exhibited not just similar looks but also speech, mannerisms, and personality type, or some combination thereof. I call it my "human subset theory".

For his last and posthumous work, The Largesse of the Sea Maiden: Stories, Denis Johnson borrows a page from my intuitively perceptive youth by featuring the above described circumstance in at least two of the five long stories. In fact, the word Doppelgänger is part of the title of the last story in the book (Doppelgänger, Poltergeist). In Strangler Bob-- a kind of prequel to an earlier story, Dundun from Jesus' Son-- a young man tells the story of his short stay (41 days) in the county lock-up, the eighteen year old narrator reflects on the tortured "souls" of those with whom he shared a cell block. 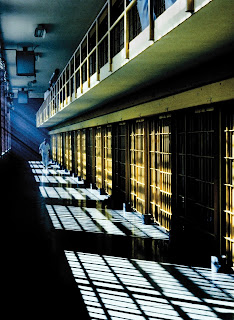 "While I was kept there I wondered if this place was some kind of intersection for souls. I don't know what to make of the fact that I've seen those same men many times throughout my life...-- turning a corner on the street, gazing out of the window of a passing train, or leaving a café just at the moment I glance up and recognize them, then disappearing out the door-- and it makes me feel each person's universe is really very small, no bigger than a county jail, a collection of cells in which he encounters the same fellow prisoners over and over..."

With passages like this, Johnson has the ability to move one deeply. The double meaning of the word "cells" suddenly and ironically takes one from the confines of a specific place to the basis of a universal truth. In these last five stories, Denis Johnson explores many profound themes like aging, mortality, memory, and mystery. In the first story The Largesse of the Sea Maiden, short vignettes comprise the fabric of an adman's life. He gives the reader a peek into his world late in life, a life filled with loved ones, acquaintances, colleagues, and ex-wives, all of whom continue to surprise him and keep him off balance, reminding him of his own mortality. "I've lived longer in the past, now, than I can expect to live in the future. I have more to remember than I have to look forward to." He muses. "Memory fades...and I wouldn't mind forgetting a lot more of it."

In Doppelgänger, Poltergeist, the narrator, Professor Harrington, who teaches poetry at the university, is quite fascinated by a stand-out student, "the real thing", named Mark Ahearn. Mark relates the story of his obsession with Elvis Presley. As he sees it, the real Elvis was murdered in 1957 by his longtime manager/handler "Colonel" Tom Parker , and immediately replaced by a doppelgänger whom Mark reasons is the supposedly stillborn, but actually stolen at birth, twin of Elvis Aron Presley, Jesse Garon Presley (OK, so this one is related). The young poet spends a good amount of his time attempting to obtain proof for his fancy premise. But the essential story here is not the elaborately constructed conspiracy theory, it is of the relationship between the amateur mentor and professional student which slowly and so eloquently reveals itself throughout. This is where we glimpse the sublime artistry of Denis Johnson. By the time he is done with the telling we are in his thrall.

Johnson completed this collection shortly before his death in May of 2017. The stories in The Largesse of the Sea Maiden are among his best work, which includes Tree of Smoke (2007), Train Dreams (2012) and his critically anointed collection of stories from 1992, Jesus' Son. But it wasn't just his adoption of my "human subset theory"-- let's face it, we are all doppelgängers-- that drew me in to this work, such perspicacity does have its lure, it was the author's unflinching ability to stare down the barrel of truth. By the end of the penultimate story, the aptly titled Triumph Over the Grave, a tangential tale filled with ghosts, which addresses impending and inescapable death, Johnson confronts the reader with this eerily prescient prognosis: "The world keeps turning. It's plain to you that at the time I write this, I'm not dead. But maybe by the time you read it."